The ancient city of Hoi An and its twin town Wernigerode in Germany will start construction of a solar power system project for the old quarter of the city.

The city"s administration said the project would be built with total funds of 135,000 euro (nearly US$150,000), of which 90 per cent will come from the German government.
The solar power source will provide 55 kilowatts per hour (kWh) for a public lighting system, lanterns, decorations, street and folk performances, the Japanese Bridge and public loudspeaker system.
The installation of the renewable energy source would promote the use of environmentally friendly power from wind, solar and water. 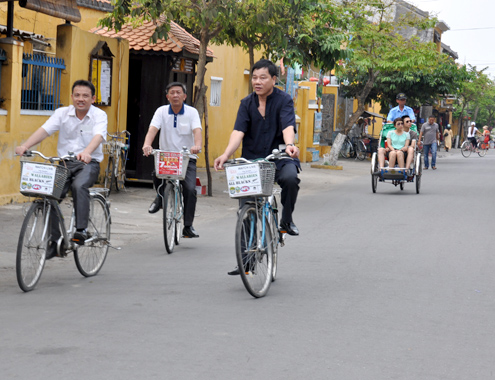 In 2013, the city in co-operation with UNESCO and the Korean International Co-operation Agency (KOICA) also debuted a solar power system at Hoài River Square and Chàm Island.
Earlier this year, the UNESCO-recognised world heritage city of Hoi An, and Naha City, the capital of Okinawa Prefecture, have agreed to commence the third phase of the Eco-city Achievement Support Project.
The city became the first locality in the country to host a Car Free Day. It has been lauded for its efforts to stop using plastic bags and for its 3R (reduce, reuse and recycle) programme.
The city plans to use 100,000 bicycles among local people with the aim of building Hoi An as the first eco-city in Viet Nam.
Since 2002, Hoi An has earmarked several streets for pedestrian and non-engined vehicles to reduce noise and ensure people"s safety in the old quarter, where most foreign tourists use bicycles to tour the city, beaches and villages during their visits to Hoi An.
The city was chosen for the 2013 Townscape Award by the UN-Habitat Regional Office in Asia, and was listed among the top 10 Asian cities in the US magazine Condé Nast Traveler Readers" Choice Awards in 2012.
Covering an area of 60sq.km, the tourism hub city has developed 22.5sq.km with agriculture and forests and 11sq.km with lakes and channels.
In 2014, the city"s Hoài River and its channels featured in the list of the 10 most famous canals in the world, produced by US-based travel website touropia.com.
Source: VNS