At a small cornor of Tran Phu street - Hoi An, tourists can easily find out famous antique ships in a models shop. The owner is Ms. Ha Tran, the 30-year-old lady who has revivified the antiques ships from all over the world. 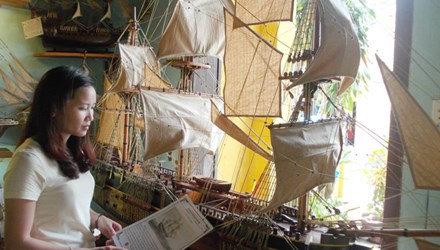 At a small cornor of Tran Phu street - Hoi An, tourists can easily find out famous antique ships in a models shop. The owner is Ms. Ha Tran, the 30-year-old lady who has revivified the antiques ships  Parking site for the legend ships

Since 17-19th century, Hoi An was an prosperous trading port considered as a famous commercial center for merchant ships from Portugal, Neitherland, China, India… In this period, warships and merchant vessels were strongly deverloping, and well-known historic ships was built also.

Born and growing up in Dong Nai province, where is popular of handicrafts, Ha has loved wooden ships made by his father as being a little girl. A lot of families around her neighborhood have made many model kinds of ships, cars, mortors... at that time, and model ships was just a simple design with three masts, told she. Her father and her brother taook time to study deeply about the most world famous antique ships.

Ha studied in college as accounting major, but ship models were what trully attracted the girl. After graduating she decided to choose to Hoi An, Quang Nam for her ships porting. She started with the support of the brother at first, but later she run on every thing by her own in the new place.

With the extremely passion, she looked for how to revivify the legend ships’ images. “It might be no one like me, being a woman but loving making wooden models. Whenever thinking about the images of beautiful ancient ships, I forget all difficulties and hardship. My hands even are calloused, I do not mind” said Ha.

After years, Ms. Ha Tran has had hundreds of model ships from a dozen of contries. All of them are hand-made.

Santa Maria, Santa Pina, Sana Nina are the very famous ships built since 16th century which were successfully revivified by her hands. Santa Maria was navigated by Captain Christopher Columpus. He and his ship traveled from Spain to US in 1492-1502. Thank to these trips, he discovered the new lands like India, Cipango (Japan) and some areas of Mediterranean Sea and the old China. These three ships have been considered as a triad together. Based on the ship’s pictures, we drawed their imitation to build the product” Ha said.

In her shop, we can see the Black Pearl imitated as the well-known ship in “Pirates of the Caribbean”, or the Titanic built in 1912 and went to the maritime history as the most terrible accident ever in the North Atlantic Ocean ...

Take a lot of work

Each ship model has hundreds of tiny details. “Firstly, a ship body frame is made by joining small wooden bars. Fabric used for sails have to be dyed in order to look like old color” Ha explained.The most difficulty is making details like guns, canons, and another controling stuffs in the ships. She take a lot of work to create tiny casts, and pouring up by brass and lead to make them. 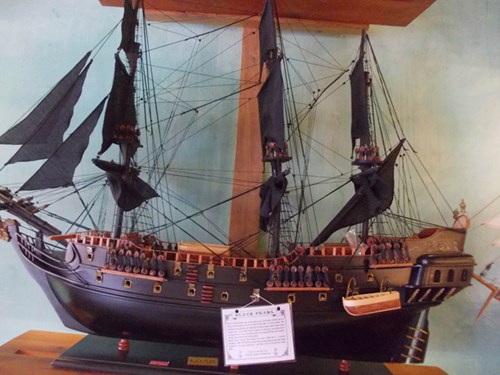 Taking the most of time is ship in light bulb. It requires the super-patience and skill to put stuffs inside the bulb, then sticking them together by a special glue. Especially, all her ships are wooden and obsolutely use dometic materials. In addition, she collects cruise models that Vietnames Kings used to use at their age.

Each model ship has its own interesting story, causing guests loss their way to an old period and dreaming as we were standing on a boat toward the huge ocean.