Hoi An – a vestige of a ancient commercial port

From the sixteenth – nineteenth century, Hoi An (Quang Nam) was once the busiest commercial port, where connected to the world civilization....

From the sixteenth – nineteenth century, Hoi An (Quang Nam) was once the busiest commercial port, where connected to the world civilization. It thanks to this cultural exchange that Hoi An has several architectural buildings bearing cultural characteristics of Vietnam, Japan and China such as the Temple Bridge, Phuc Kien Gathering Hall, Confucius Temple ... 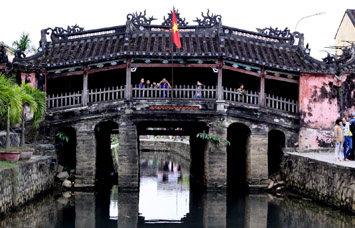 The Temple Bridge – a symbolic architecture  in Hoi An
According to historical documents, during prosperous era (in years of the 17th and 18th centuries), Hoi An was bustled with boats, on the wharf and boats were crowded with people. The book called “Phu Bien Tap Luc” by Le Quy Don, a famous Vietnamese scientist in the 18th century  affirmed that "all the goods are here; hundreds of big cargo ships cannot transport them all at the same time". It is because during this period, Hoi An was an urban center with international commercial port that most flourished in Southeast Asia, it was a key economic base of the Nguyen lords, kings of Nguyen dynasty in Cochin. The bustling of Hoi An began to diminish from the late 19th century due to many factors, especially when the "young urban mechanical port” came into operation in Da Nang. However, thanks to this fact that Hoi An has not been negatively affected by the modern urbanization to preserve its unique ancient urban architecture as we see it today.
Not only famous for its heritage of an ancient town but Hoi An is also known as a heroic land. During the years of resistance wars and revolutions, generations of Hoi An people had joined the revolution, and thousands of Hoi An people had died for independence and reunification of the country. In 1998, Hoi An was awarded by the government of Vietnam the title "Hero of People's Army of Vietnam". Joys follow joys, a year later in 1999, UNESCO has named Hoi An to the list of The World Cultural Heritages, and in year 2000 Hoi An was awarded with the title of "Hero of Labour" in the “Doi Moi” Period (renovation).
Nowadays, due to many factors the famous trading port of Hoi An ancient town no longer exists, but ancient streets and architectural buildings that represent cultural exchange with many countries along the history are still well-preserved, almost intact. Spatial landscape of an ancient trading port is still lively reflected through the temples, gathering halls, ancient houses, museums, dig wells, family worshiping houses and through customs, living habits, lifestyle, festivals, cuisine, and traditional professional villages of the local people.
Talking about Hoi An, people also talk about a very famous vestige that represents the interaction and influence of Japanese culture, the Temple Bridge - this is the main symbol of the ancient town of Hoi An. The temple bridge is also known as the Japanese bridge or Lai Vien Kieu, which was built by merchants in Hoi An around the 17th century. Even so called the temple, but no Buddha was worshipped here, it was Bac De Tran Vu - a god for storm, flood and land protection according to a Chinese belief was worshipped.
Hoi An now has several ancient houses that have mixed architecture of China and Japan such as the ancient house of the Tran tribe, Tan Ky, Duc An, Diep Dong Nguyen ... One special detail that can be easily noted when looking at the façade of the architectural buildings in Hoi An is the door’s eye, according to a local belief: Animism. Therefore, labeling the eyes for the house is the same as labeling the eyes for the boats on voyage; the purpose is to help the owners avoid bad things.
Respectfully, although have been experiencing many ups and downs in the history and located in the area that are frequently devastated by floods but the local government and people of Hoi An have been resilient to preserve, maintain and promote both tangible and intangible values of this world’s cultural heritage. Quang Nam Heritage Festival 2013 has just finished - the land and the people of Quang Nam province have really captivated tourists and also to fulfill its mission in promoting to the world about a comprehensively preserved heritage including the ancient town of Hoi An, My Son Sanctuary, Cham Island – the world’s biosphere reserve (Tan Hiep island commune, Hoi An, Quang Nam)